Alumni Don Good ’66 is among two others that have partnered to become the new ownership team for Etcetera Publications Inc.. Together, Linda Vogel, AJ Al-Rajab and Donald R. Good will be keeping local media alive and well. Congratulations to all!

Here is the article that announced the change in ownership, this article appeared in the Eastern Ontario AgriNews September Edition. 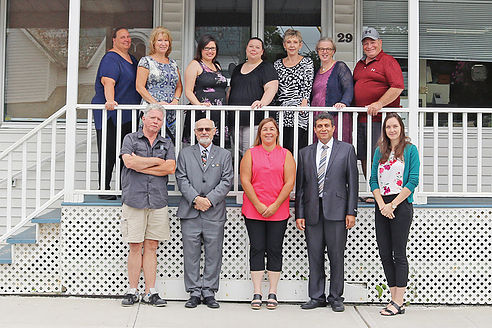 CHESTERVILLE – On Aug. 1, partners, Linda Vogel, AJ Al-Rajab and Donald Good, officially took over ownership of the Chesterville Record. North Dundas Mayor Eric Duncan, presented the group with a scroll on Mon., Aug. 13 to congratulate them on the acquisition of the local business. The scroll reads, “We appreciate your positive contribution to making North Dundas a great place to live, work and raise a family.”

Linda Vogel operates a farm with her husband in North Stormont and owns Linda’s Bookkeeping, with offices in Chesterville, Apple Hill and Perth. She has been the manager of Etcetera Publications (Chesterville Record, Villager and Eastern Ontario AgriNews) for four years, and will continue in the role for the day to day operations.

Donald Good is an agricultural lawyer from Ottawa with experience in journalism. Good sold his practice, which opened in 1983, to AGB Lawyers to grow his firm in 2012.

AJ Al-Rajab has a PhD in agricultural sciences from Lorraine University, France. He worked for different institutions including Agriculture and Agri-Food Canada as postdoctoral fellow. Dr. Al-Rajab published over 25 scientific research articles and a few book chapters related to the agricultural and environmental sciences. His interest in agricultural publishing and knowledge transferring, led him to join the team at Etcetera Publications.

“We are excited to continue the legacy of the Chesterville Record, Villager and the Eastern Ontario AgriNews. All three partners are committed to providing quality editorial to the counties of Stormont, Dundas and Russell,” said Vogel. “We look forward to being an active part of the local community.”